Patrick and his sister were left without parents to care for him at the tender age of 13. He had great faith however, so despite growing up in the slums of Kisene he was found by a traveller who noticed something unique and poised about him.

With help from a very loving international community, albeit a small one, Patrick- now age 20, together with William and a house-mother (a widow) cares for 50 kids in the home he was given funding for, while tutoring/teaching another 70 local children when his 50 are off to school, and shepherding for another ~150 or more on the streets where he grew up. 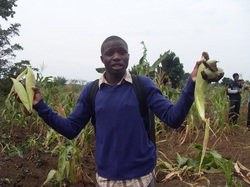 "Uncle William" joined Raising Up Hope Uganda in 2007. He loves football, loves God, and loves the children. Nearing the end of a degree, William has been blessed with a strong intellect, warm personality and infectious laugh.

Teaching can be difficult, but so is learning. It our job to teach our children the importance of perseverance, of working hard. They’ve come from nothing, where no matter what they did, things were bad - now we have to instill in them strength of character, to persist at school, determination. We’re not here to spoon-feed them, we’re here to train them so they can look after themselves, so they can look after others.

The Story of Patrick & Jamie 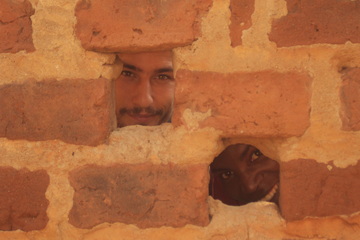 Patrick, a teen dressed in a t-shirt, was who showed up to my office when I called an orphanage and asked for their director to meet & connect about a possible sports program. As the 19 year old founder of the orphanage told me his story as a 'volunteer', I sat in awe. At age 13, he became an orphan on the street, caring for his 11 year old sister. Living in the slums and eating what scraps he could, he stayed faithful. One day he was found by a lady touring the capital, and she was captivated with his genuine faith/optimism despite his situation. Through her, he was provided living & school- which he was travelling to one day a few years later when he stumbled upon a 2 year old who’d be thrown away. Meeting her needs & taking her in, he’d find himself doing the same for a boy in a ditch, in the rain- saving his life from pneumonia, and taking him in- as his parents had also died. At age 17 he’d gathered 8 others into the small apartment, and liberated them from life on the street- but got an eviction notice; not losing faith he shared his situation via email, to those he knew. (His email sent from an Internet cafe met an American woman whose sister had very recently passed away, and left $30,000 to a ‘good cause’- a cause for which Patrick was found to be suited). With the money he saw the purchase of a home on the city’s outskirts, with several rooms to which he added many 3 story bunk beds. Patrick’s frequent trips back to the ghettos of Kampala would see him build relationships and reach out in love (and in sport, hygiene assistance- whatever he could bring to them) and by the time I met him, had filled his house with 43 former street children. They are some of the most inspiring people I've ever met in my whole life.
He goes without food when they do- which can be several days a month. Food costs in Uganda are inflating, and he relies entirely on outside support for the children's needs. He's more committed than anyone I know- no facet of his life is held back from his passion, his vision, his mission. His faith.

Food is always seen as a blessing, most days they have two or three meals of posho (ground corn) and beans. They educate 70 local childrenw ho dont have school when their own children go to school. We want to next build a school for these children- which needs a building, teachers, infrastructure (plans) and supplies. 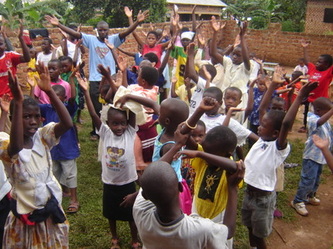 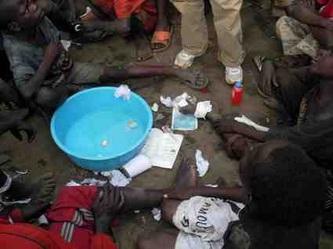 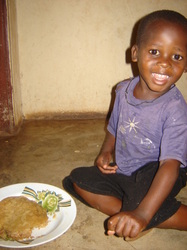